The YLW Alumni Achievement Award was first established in 2004 to honor graduates of the Yale Law School. The Award is presented annually to a YLW alum whose personal and professional career epitomizes the mission statement of YLW: to advance the status of women and traditionally underrepresented gender identities at Yale Law School and in the legal profession at large. This award honors alumni who not only succeed in the highest reaches of their professions, but also use their success to help other women and people with underrepresented gender identities succeed; alumni who trailblaze to encourage others to follow in their footsteps. The award specifically recognizes alumni who demonstrate valor, wisdom, and compassion.

Our list of distinguished recipients of the YLW Alumni Achievement Award include:

Fatima Goss Graves ’01 (2020-2021)
On April 29, 2021, YLW virtually presented the Alumni Achievement Award to Fatima Goss Graves, President and CEO of the National Women’s Law Center.  Goss Graves has a distinguished track record working across a broad set of issues, including income security, health and reproductive rights, education access, and workplace fairness. Goss Graves is among the co-founders of the TIME’S UP Legal Defense Fund, currently serves as an advisor on the American Law Institute Project on Sexual and Gender-Based Misconduct on Campus, and was on the EEOC Select Task Force on the Study of Harassment in the Workplace and a Ford Foundation Public Voices Fellow. YLW recognized Goss Graves as someone who has turned hope into action and focused on working inclusively, with a focus on the interconnected issues facing LGBTQ people, women of color, immigrant women, and low-income families, all while centering the experiences and voices of those harmed. After her speech, Goss Graves kindly participated in a roundtable discussion with students.

Anita Hill ’80 (2019-2020)
On April 22, 2021, YLW virtually presented the Alumni Achievement Award to Anita Hill. Professor Hill is the University Professor of Social Policy, Law, and Women’s, Gender and Sexuality Studies at Brandeis University, where she teaches courses on gender, race, social policy, and legal history. She previously worked in the U.S. Department of Education’s Office for Civil Rights and the Equal Employment Opportunity Commission, and she was the first tenured African American professor at the University of Oklahoma College of Law. Last year, TIME named Professor Hill “Woman of the Year” for 1991, the year she testified before the Senate Judiciary Committee. YLW recognized Professor Hill as someone who is brave and tenacious, who unabashedly pursues justice and equality, while being completely and authentically herself, and who has reshaped the field of legal academia—and the legal profession more broadly—to create a more equitable space. After her speech, Professor Hill graciously participated in a conversation with students and professors. This ceremony was originally scheduled for spring 2020 but postponed to spring 2021 due to COVID-19.

Stacey Abrams ’99 (2018-2019)
On April 17, 2019, YLW presented the Alumni Achievement Award to Stacey Abrams. Abrams is the first woman to lead either party in the Georgia General Assembly and the first African American to lead in the Georgia House of Representatives. She is also the first Black woman in the United States to be a major party nominee for governor and the first Black woman to give the response to the State of the Union address. The remarks of YLW Executive Board Chair Anna Funtelar ’20 are available here, and the remarks of Vice President of the Black Law Students Association (BLSA) Briana Clark ’20 are available here. 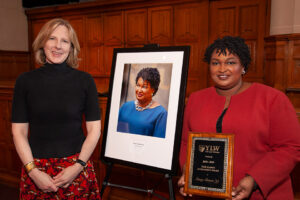 Maryana Iskander ’03 (2017-2018)
On February 1, 2018, YLW presented the Alumni Achievement Award to Maryana Iskander. Iskander is the CEO of Harambee Youth Employment Accelerator, a non-profit that partners with South African employers to source, place and successfully retain young, first-time jobseekers. Prior to that, she served as chief operating officer of the Planned Parenthood Federation of America, where she still sits on the board of directors.

Marian Wright Edelman ’63 (2016-2017)
On March 2, 2016, Yale Law Women presented the Alumni Achievement Award to Marian Wright Edelman, activist and founder of the Children’s Defense Fund, at a reception at the law school. YLW recognized her accomplishments as a leader and advocate for the rights of women and children. Edelman provided current YLS students with inspirational stories about what she has learned throughout her career, and encouraged all of us to pursue what is right and fight for opportunities for all Americans. During the event, the law school also used a photo of Edelman to unveil its new photo project honoring the diversity of our alumni. 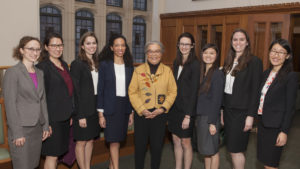 Justice Sonia Sotomayor ’79 (2014-2015)
On October 26, 2014, Yale Law Women had the honor of presenting United States Supreme Court Justice Sonia Sotomayor with the Alumni Achievement Award. Before a crowd of students, Justice Sotomayor encouraged current YLW members to continue forging ahead fearlessly, predicting that one of us would follow her to the Supreme Court. Following her acceptance speech, Justice Sotomayor graciously posed for pictures and chatted with attendees at the reception. YLW is thankful to have had the opportunity to celebrate Justice Sotomayor’s many accomplishments and extraordinary character with the Yale Law School student body. For more information, please see YLW Chair Stephanie Krent’s welcome speech, YLW Alumni Relations Chair Julia Shu’s award speech, and the letter from YLS students written to Justice Sotomayor. 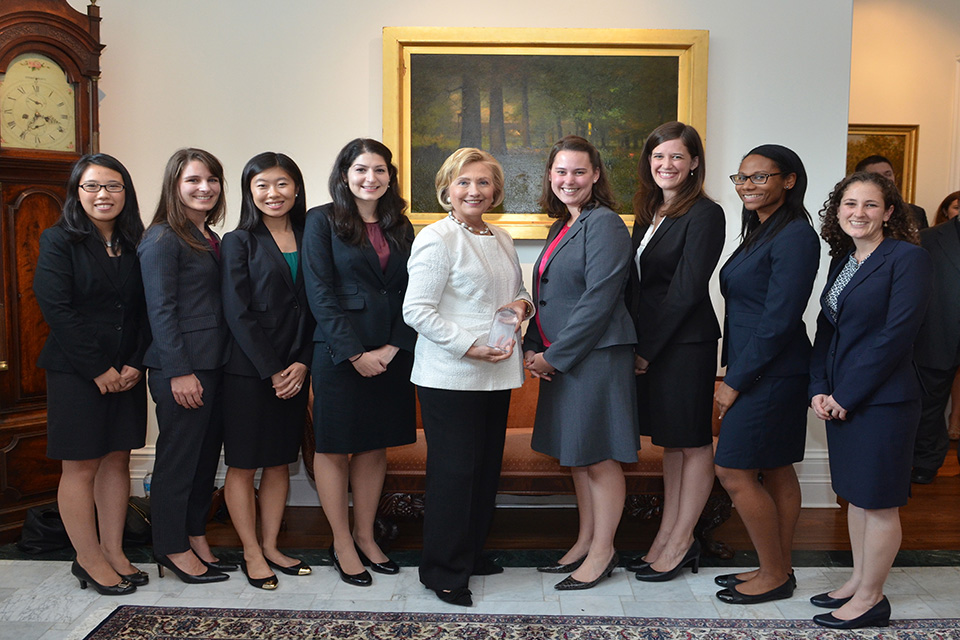